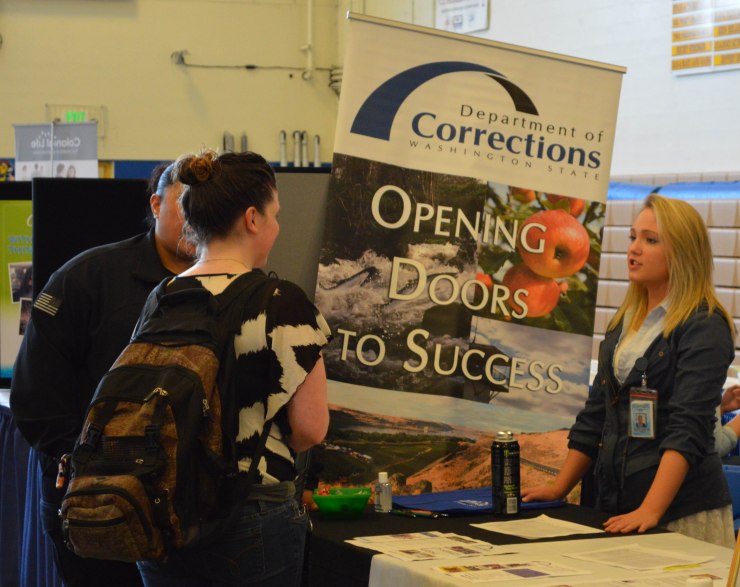 The 23rd annual Job Fair drew a crowd of approximately 400 people from the college and the community. When Job Fair Coordinator Joan Rogerson opened the gym doors on Wednesday morning, people were already lined up waiting to get in!

Fifty six vendors filled the gym, representing a wide variety of employers including state and county agencies, private and non-profit businesses, municipalities, retail businesses, apprenticeships and more. While most were local, a few came from as far away as the Seattle area and Vancouver, Washington.

Throughout the event, hundreds of job applications were handed out. Thorbeckes, a local fitness center, was actively recruiting swim instructors and lifeguards. Over 50 people picked up their applications and more took business cards for online applications. “We got some great leads,” said their representative.

While several employers have been coming for a number of years, this year the Job Fair welcomed a few new faces. Cummins Northwest, Consolidated Electrical Distributors of Centralia, Department of Retirement Systems, Dicks Downtown Pub & Eatery, Federal Highway Administration, King County Sheriff’s Office, Olympia Police Department and the Federal Bureau of Investigation were among some of those newer vendors.

After the event, coordinator Joan Rogerson thanked the many students and staff who worked together to make it a success. “The Job Fair was a great day!”